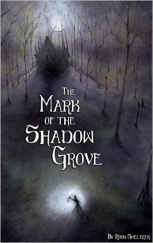 “The birches- wizening old man arms bursting from the black soil and piercing heaven-  are like the columns of some ancient temple.”

This is not my normal fare for books. However, sweeping lines such as the one above hooked me in, and I am very glad I was caught.

The Mark of the Shadow Grove is a horror novel telling three separate stories loosely connected by the leading women’s bloodline and the monsters they revolve around. Each ending is left a little open, giving them creepish mystery. I don’t usually like open endings but it worked so well for this book I can’t say anything else would be better. The book explores the dark elements of witchcraft, ancient cults, and necromancy.

Ross Smeltzer has a writing style which could be considered antiquated. His  language architecture often reminds me of Wilde, Emerson and Lovecraft. Part of this may be because the book is set in the past so the language style fits its time period. I think there is more to it. Smeltzer possesses the old talent of creating a captivating setting by using long, flowing descriptions. His style is old fashioned. At the same time he manages not to droll. Many of his strongest lines were simple.

“True evil needn’t be flamboyant about itself.”

The above statement is said in a very colorful setting by a dramatic character. It is one of the most basic lines in the chapter. However, the line caught my attention with it’s simple truth. Smeltzer has similar moments scattered throughout this book and they are my favorite parts of his writing style.

The Mark of the Shadow Grove is not a light read. Its prose sweeps you in and manages to make mundane things come alive with the dark, gloomy mood Smelter casts over his setting. I wouldn’t  recommend it for most readers. This book is a certain style built for a certain taste, but the audience it is written for is sure to love it. People with an adventurous and curious side will love it too. The Mark of the Shadow Grove is a gritty example of gothic horror, and I enjoyed it so much  I think I will start picking up the genre again. When I was little I would sneak-read Rebecca and Dr. Jekyll and Mr. Hyde by the lowlight coming from my bedroom window. I forgot how much I enjoyed them. This book reminded me.

4.7 stars for The Mark of the Shadow Grove. I took off because I personally appreciate a slightly quicker pace, and there were instances where the scenes jumped around and I was a tad confused. However, these “flaws” have more to do with me than the book, so I won’t take off much, and as you all know…

So five stars will be my rating on all of the review sites.

Grab your own copy of Ross Smeltzer’s The Mark of the Shadow Grove here. It is well worth your time!